It feels like some sort of nightmarish, abstract event… like a dream. I have memories about it… but I’m not sure if it really happened or someone told me about it. When days like yesterday happen, it’s hard to describe how unreal and horrible they are. And when days like yesterday happen, they shock me, surprise me… like I can’t believe all the migraines I had before that were really migraines… because I’m inside a thunderclap. Migraines like yesterday are being inside a thunderclap. That may be the best way I can describe it.

Yesterday was a big deal. Allow me to set the stage. We had plans: I need footage of my son and his fiance for the wedding video I’m working on. We had set aside the date to go to Pace Bend Park and get drone video footage. I had gone over the details of what I needed in the weeks before with Marc, my awesome hubby and expert drone operator. The day arrived and I woke with my alarm at 9:30. As my eyes opened and I came to consciousness, my heart sank a couple of inches right away, as I could feel migraine. That sting – almost electrical – in my brain… I feel it in the mid brain, in my eyes (like a droop), in my sinuses (which I keep clear with antihistamines). It was a #4 on the migraine scale.

I fed the dogs and made coffee, listening to the migraine… assessing it, judging it and planning how to treat it. This is a common job for me. I’m like, an expert. (Roll eyes)

I took a triptan and said my small prayer (please, medicine… work and don’t give me too many side effects.) and started getting ready. My getting ready routine was not smooth (as is the norm the last several years). After shower, I often need to collapse on the bed before I can get to dressing, makeup, hair, etc. This is chronic illness.

Ken and Courtney arrived early. Which was fine, but Marc and I were so not ready to go. I tried to get the other kids moving, get some breakfast (important not to medicate on an empty stomach). I took more medicine. The triptan was FAILING. Migraine was up to #5-6.

There’s a little panic that starts about this part of the story. Marc was acting weird and distant (focusing on drone? Idk, it’s impossible to get information from him when he’s in this silent stress vortexing zone). At this point, I’m trying to explain to him that my migraine is preventing me from behaving/acting/thinking/working like a normal humanoid. Donna is in trouble; Migraine is taking over.

Admittedly, I’m probably not capable of actually saying these things. (That’s a hard concept for some people to understand. If I were trying to describe it to others, I might say that I am almost becoming another person; my migraine is taking over my person and I am becoming completely disabled).

So… if I were being prudent, I might verbalize to Marc that we should cancel today’s plans. BUT…

3) I need to get certain things accomplished.

4) This has been planned, and

5) I may totally start feeling better with this second round of medication. Right? This makes sense?

Over the next hour we putzed around the house: I couldn’t get the other children to come, I was packing stuff like sunscreen and towels, and Marc was figuring out basic stuff, like, “oh, I need to put on a swim suit!” Even though I’d been walking around in one for hours. My migraine was not relenting. And I was definitely feeling it.

We set off for the half hour drive together. I was starting to act a little migraine manic. Nausea was starting and I had no phenergan with. I started my default conversation: Apologizing Script:

To this, my family always respond: No don’t worry, blah blah blah. What they need to be hearing (especially my husband) is that I am not okay right now! I’m disabled and very sick. And I need help!

But he was kinda checked out. So he didn’t hear it. He also didn’t remember a lot of what we discussed the night before; about the footage I’d need and the YouTube video examples I showed him. So that wasn’t helpful.

We arrived at Pace Bend and tried to figure out where to take video/photos. Stepping outside the car was absolute hell. It was 100-degrees with some humidity and very sunny… absolutely murderous weather for a migraine at #6-7. My migraine mania started morphing into wild anxiety… I might even call it terror. But, I didn’t have time for terror. I didn’t have time for any of this.

God knows what I look like during this part of the migraine ride… am I wild-eyed behind my dark sunglasses? Is my voice higher-pitched, do I make any sense? All I know is I’m losing my shit and trying incredibly hard to maintain – something humanoid.

I tried taking more medicine. I was directing Ken and Courtney in all sorts of ways and trying to get video and photos. The drone was completely failing: it was flying off in the light breeze, it wouldn’t connect for video, the controls were worthless. Marc was as silent as the grave, simmering unhappiness and frustration… unable to communicate with anyone. And I was crazy. What a pair. Ken and Courtney were awesome.

I’d have spurts of clear-ish thinking when I could get a shot or organize a sentence. But the nausea and thundering in my brain/body would stop me in my tracks… I’d almost collapse where ever I was.

We spent about an hour and a half trying to get this footage accomplished… and it wasn’t at all what I had envisioned, so I was trying very hard to change my expectations… to create off in a different direction, be flexible. 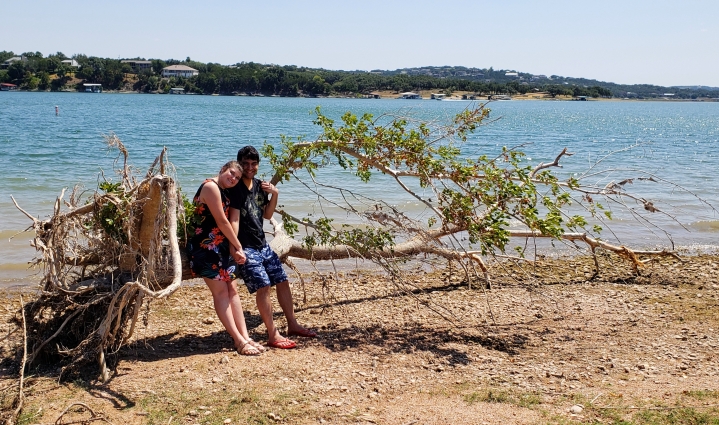 I was also pretty sure I’d be dead from migraine in moments.

We finally packed up and headed home. Migraine at #9. I couldn’t get myself to vomit. I was pretty sure throwing up would actually make me feel a little relief.

When we got home, I tried unpacking, organizing the mail, saying goodbye to Ken and Courtney. I took a shower and medicated again… this time with the right kind of heavy duty that would induce mini coma. I climbed into bed with ice. It was about 4:30pm.

This is where things get even more hazy. I was editing photos, talking to my kids, eating some dinner, making sure my daughter got to babysitting, texting my brother who’s oldest son got engaged! And I was absolutely NOT myself. Just a disabled crazy person with a migraine #9 waiting for mini coma.

I was OUT by almost 8pm. Things were still happening around me at our busy house. I don’t know if I was making sense. And I was having migraine dreams… which are always vivid and emotional.

I feel so badly that these things are a huge part of me. I spent a huge amount of time talking to Marc today about how it would be beneficial if he could actually hear me when I’m like this… how I cannot really verbalize the truth: I am in trouble.

I woke at 5am still migraining, but down to a #3-4. I took my nightly medications, replaced my ice and went back to sleep. My mascara from the day was still on. Oh well.

The alarm went off at 10am today. We had plans to meet Ken and Courtney and Courtney’s mom at the wedding venue in Bastrop. Still 100-degrees and painful weather. But I will make it. More medication. Cefaly during the drive, push through the symptoms. Push through. Smile. Try and make sense. Apologize for being a freak. This is my life.